· Unlock Alcatel phone by IMEI in minutes
· Safely, fast and from the comfort of your home
· Compatible with 3 Hutchison, Crazy John's, Globalstar, One. Tel, Optus, Virgin, Vodafone

How to know if I need to unlock an Alcatel device?

When you insert a SIM card from another carrier on your Alcatel phone, the device should request the SIM Network unlock PIN, SIM ME Lock or Enter NP Lock code. It means that the Alcatel needs to be unlocked from the service network with the SIM lock code.

There is an exception with MetroPCS and T-Mobile carriers that lock the phones with an app called Device Unlock. To unlock this phone you need the official authorization.

How do I get the SIM unlock code FREE?

If you are the device´s original owner and have fulfilled the contract, you can call the carrier to request the unlock code for free, if you do not meet these requirements we can provide the SIM Lock code in a few minutes.

How to unlock an Alcatel device with password or pattern lock?

The first thing you have to be clear about is what type of password your phone asks for. If the password is requested when inserting a chip from another carrier, then the phone will indicate "SIM network unlock PIN". If, on the other hand, the mobile requests the password or password, it means that someone has blocked or restricted the use of the terminal, we would also recommend our free tutorials in the RESET 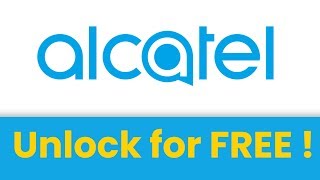 if you have any queries about our services, you can contact our call centre where you will have all of your questions answered. Our staff will be happy to help you.

it doesn’t matter which service provider you are with, whether AT&T, Vodafone, Orange, T-Mobile, Sprint, Movistar, etc.

You can unlock your blocked 3 Hutchison, Crazy John's, Globalstar, One. Tel, Optus, Virgin, Vodafone telephone from Australia, and then use any SIM card from any country or network.

How many attempts of liberation does Alcatel have?
Most have 10 attempts, some other models have 5, if the attempts are exhausted it will be necessary to reset the cable terminal with a professional unlock box.
When entering an opposite SIM, the phone should ask for the unlock code and usually indicate in square brackets the number of attempts left.
Is it mandatory to know the Provider to release an Alcatel?
Normally yes, our form will always request that you choose the Provider of the team. It can be found on the back sticker, when removing the battery or on the side of the box. If you still do not find it, you can contact us and we will help you.
Can I unlock my device in contract?
Yes, because releasing a phone has nothing to do with the contract of permanence, you have the duty to fulfill a contract with the operator but that contract can fulfill it with any other phone, or continue to comply with a terminal released.
The operator will never penalize you for releasing a terminal.
Can I unlock a phone found, reported or in a negative band?
Yes, we can unlock the phone, even if it is blacklisted. But most likely after releasing it will not work with any operator, because if it is in blacklist as reported does not let call or receive calls with operators in the country. What I could do is; free the terminal to use it in another country, since the report does not affect countries abroad.
What if the unlocking does not work?
If the model is well selected, the original operator and the terminal does not have the software manipulated, the code must work.
Whenever the code is wrong, the money is returned, that is, in most cases we demand a video showing that the code has failed.
Is mobile phone unlocked for any company and country?
Yes of course, today virtually all GSM phones are quad-band, this means that your phone has an antenna with 4 frequencies that are compatible with all the operators in the world.
Can it be blocked again in the future?
Of course NO, once the release code is marked the mobile memorizes forever that it must be free. Perhaps if it is taken to repair an official technical service it could be blocked, but simply by simply re-dialing the code it would be free again, and if you have not saved your code, we will send it back to you at no additional cost!
Where can I unlock my Alcatel?
You can unlock the phone from the comfort of your home., movical.Net offers this service for Australia cities such as; Sidney, Melbourne, Brisbane, Perth, Adelaide, Gold Coast-Tweed, Newcastle, Canberra, Wollongong, Sunshine Coast, Hobart, Geelong, Townsville, Cairns, Toowoomba, Darwin, Launceston, Albury–Wodonga
Customer reviews
Rated 5.0 of 5 based in 70 Reviews.
2156823368 from United States - 30/07/2019

"Everything went smooth, phone accepted the code, paid a reasonable price too."