Select original network provider Don´t select the network you are going to use
Why unlock my LG K40?

Any network You can use any service provider in all countries

Forever The unlocking is perpetual, you can update your phone

Warranty unaffected Unlockigs by code does not void your warranty

Without losing data No affect information it contains

If MetroPCS phone has installed the Device Unlock App, we can unlock your MetroPCS K40 with this official unlocking.

What is the Device Unlock App?

Device Unlock App Service is a OFFICIAL unlocking service for phones with the Device Unlock App installed by MetroPCS and T-Mobile. With this app you can unlock the phone so it can be used with any network provider in the world.

K40 Device Unlock App shows: Not Eligible for Unlock. Can I unlock my phone?

Yes, this message means you can unlock your phone using our service.

Unfortunately, if these two messages shows in your MetroPCS LG K40 you cannot be unlocked using the Device Unlock App.

MetroPCS version is the model LM-X420MM

T-Mobile version is the model LM-X420MM

For other carriers the version is LM-X420HM, this device has not installed Device Unlock app

How to insert the unlocking code for the LG K40 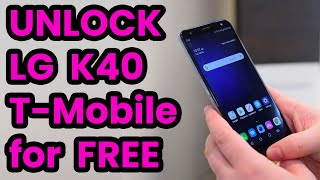 1. - Make sure you have an active data connection via 3G/4G/LTE or Wi-Fi.
2.- From the Application list, tap Device Unlock, the application is located in the MetroPCS folder.
3.- Choose the Permanent Unlock.
4.- Restart the device.