If you want to get the unlocking code for your Motorola Moto E6 Play, we recommend you to contact to the original carrier, because it is the only way to obtain the SIM network unlock PIN for free. You must know that you need to fulfill the carrier's requirements, such as being the cell phone plan owner. In these cases, it is very difficult to acquire the free unlocking, so Movical.Net can get you the same unlock code in record time.

How to insert the SIM network unlock PIN

The easiest way to unlock a Moto E6 Play is to get the official unlock code thanks to our Motorola servers, when other SIM cards are inserted, and your Motorola Moto E6 Play asks you for the code; you must fill out the questionnaire and in a few hours you will receive an email with the unlock instructions.

It is important to note that a Motorola usually has five attempts to insert the unlock code. If the attempt counter is zero, our unlocking code will not work on your Moto E6 Play. The solution will be to reset the mobile phone by cable, but it has a higher cost depending on each model.

Is the re-lock possible for my Motorola Moto E6 Play?

No, our unlock is never removed, you can update your phone as many times as you want or even reset your mobile.

Can I use my phone worldwide?

The unlocks that we offer allow you to use all the SIM cards such as 3, Access Telecom, Airtel - Jersey, Clever Communications, eMobile, Meteor / Eir, O2, Tesco, Vodafone - Eircell from Ireland and all over the world.

Motorola Moto E6 Play does not allow me to send calls

If the Moto E6 Play accepts the SIM card but does not allow you to send or to receive any call, it could be because the IMEI is blacklisted due to loss, theft or unpaid bills. Even if SIM unlocking is achieved, it is necessary to fix the IMEI problem contacting the carrier.

Can the Motorola Moto E6 Play be unlocked when it doesn't prompt for the code?

On some occasions, the AT&T, Cricket, metroPCS and T-Mobile phones do not prompt for the unlock code and are locked with the official application Device Unlock, this app is already installed by default in the device. You have to buy the unlock and we take care of the approving authorization to unlock it. Once approved you only press the Permanent Unlock button and it will be unlocked forever.

The Motorola Moto E6 Play from Sprint, Verizon, Tracfone, Boost Mobile, StraightTalk or Simple Mobile from United States also do not prompt for the SIM network unlock PIN, because these phones have a blocked firmware with the carrier. Our company solves this block and removes this restriction, but it has to be unlocked with a program on the PC and our technician will help you remotely.

All these versions are supported 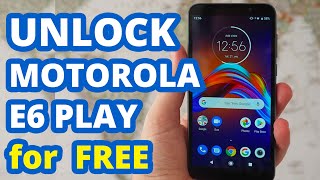 1. - Turn on the handset on with a SIM card not accepted by the device (your new network operator)
2. - If the card has a PIN number, enter it and press OK.
3. - The device will prompt: “Network lock”, Now enter the code and press OK.
4. - Your cellphone will indicate: "Unlock successful", becoming permanently unlocked.
4b.- If the step 3 code was wrong, introduce secondary code, and press OK.

1. - Make sure you have an active data connection via mobile data or Wi-Fi.
2.- From the Application list, tap Device Unlock, the application is pre installed in your device.
3.- Choose the Permanent Unlock.
4.- Restart the device.